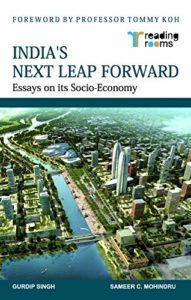 India needs multi-billion dollars of investments and deep technologies in logistics, warehousing and a robust highways transportation network, a massive upgrade from the told systems of godowns and individually owned-unionised trucking across the country.

With Goods and Services Tax (GST) and Radio-Frequency Identification (RFID) tags in place along with e-commerce, warehousing transformation is taking place at a fast pace, according to top industry executives.

The whole logistics eco-system has changed from ‘old godowns’ with coming of the e-commerce companies, according to FICCI Secretary General Dilip Chenoy.

Large scale warehousing is being put up, he said sharing his views on developments taking place in the economy at the DefExpo 2020 held 5-8 Feb 2020 in Lucknow.

The logistics is a very big field in which the country needs to develop a lot, feels Rear Admiral A K Verma (Retd.), Principal Advisor to the Society of Indian Defence Manufacturers which is part of the Confederation of Indian Industry.

The United Kingdom has very robust logistics and warehousing system which can help in a big way in developing the logistics and supply chain system in India, he said of the international expertise required in the warehousing and logistics infrastructure for the 1.4 billion market.

“We need to develop a smart transportation and trucking where everything is based on IT system.

“This will also ensure that pooling of transportation network and the customers will be able to get value for service and I think smart trucking is going to help the logistics in a big way,” said Verma after signing an MoU between SIDM and UK India Business Council’s defence sector at DefExpo 2020.

An industry expert have also given a ‘Policy and Regulatory Push Needed for Logistics Sector’.

After entering the spotlight in 2018, the logistics and warehousing sector had an average 2019 due to the overall economic slowdown and global headwinds, according to Prashant Thakur, Director & Head – Research, ANAROCK Property Consultants.

Even as measures such as ‘Make in India’ and the implementation of GST have had a positive impact on the sector, more measures on the policy and regulatory front are awaited by all stakeholders, said Thakur.

Compared to developed economies, India’s logistics sector still has a long way to go. The government needs to formulate the right policies to turbocharge the sector’s growth.

In the latest budget 2020, the Finance Minister Nirmala Sitharaman has made several announcements that will have a direct or indirect bearing on the development of the logistics sector.

Thakur takes a look at how the budget announcements and policy decisions will bode well for India’s logistics industry:

During her Budget 2020 speech, the Finance Minister announced that the government will soon launch the long-awaited National Logistics Policy.

This comprehensive policy envisages smooth functioning of the logistics sector by clarifying the roles of the central government, state governments and key regulators.

Impact: A formal National Logistics Policy is likely to create a single-window e-logistics market and remove red-tapism from the sector while also generating more jobs.

Boost to Infrastructure: One of the biggest announcements of Budget 2020 was the allocation of Rs.1.7 lakh crore for transport infrastructure in 2020-21. Enhanced and faster development of highways will be a major priority for the government and will include building 9,000-km of economic corridors, 2,500-km access control highways, 2,000-km of strategic highways and 2,000-km of coastal and land port roads.

Impact: Infrastructure investments and developments in various modes of transport and infrastructure has a direct bearing on the growth of the logistics, warehousing and ecommerce sector. The augmented speed of mobility will also help in mid-mile and last mile delivery, providing impetus to e-commerce companies.

Increased investment in logistics and warehousing: Minister Sitharaman also assured that the logistics and warehousing sector will receive some portion of the Rs.100 crore corpus announced by the Prime Minister Narendra Modi in his Republic Day Speech. Around 6,500 projects across various sectors will benefit from this funding which will be completed over the next five years.

Impact: Increased investment will provide a shot in the arm to the logistics and warehousing sector and accelerate the pace of many ongoing projects.

Infusing funds into the sector will lead to incremental jobs across categories and also translate into high mobilization of workers all over the country.

Push to efficient warehousing: Budget 2020 also proposed to build a seamless national cold storage chain. In yet another positive development for logistics and warehousing, National Bank for Agriculture and Rural Development (NABARD) has been assigned the task of mapping and geotagging warehouses and cold storages.

Impact: Developing efficient warehousing based on the Public Private Partnership (PPP) model is expected to bring down logistics costs and improve holding capacity. This will further enhance organised supply and boost overall growth of the logistics vertical.

The good news is that this year’s budget came with several incentives and investments for the logistics and warehousing sector.

However, the need of the hour is long awaited and anticipated National Logistics Policy that will set the roadmap for the sector’s future growth.

On the back of structured reforms such as implementation of GST, infrastructure status to logistic sector and the growth of e-commerce players, the warehousing sector in India has entered a new chapter of growth.

Gone are the days when Indian warehouses, particularly in the unorganised sector were nothing but low-quality godowns, Thakur pointed out.

What you see today across major warehousing corridors are sturdy and scientifically designed steel structures, which are pre-engineered in factories and assembled at the location. These water-proof and well-ventilated warehouses are temperature-controlled and fitted with CCTV cameras.

Apart from the cosmetic transformation, the warehousing industry has seen many other changes in the last three years with the following trends dominating this upcoming sector.

The government also plans to create warehousing in line with Warehouse Development and Regulatory Authority (WDRA) norms. Furthermore, the National Bank for Agriculture and Rural Development (NABARD) will map and geotag the warehouses and cold storages.

Warehousing in rural areas to be promoted: The Finance Minister has also proposed a village storage scheme to enable and support farm-based activities. These warehousing schemes will be run self-help groups (SHGs) and will provide better holding capacity to farmers.

Moreover, the government will also provide viability gap funding for setting up such warehouses at the block/taluk level. Based on the public-private partnership (PPP) mode, such schemes will be built on land provided by states.

At the same time, Food Corporation of India (FCI) and Central Warehousing Corporation (CWC) will develop warehouse building on their land too.

Digital Technology improving efficiencies: Like other sectors, logistics and warehousing is also leveraging technology to achieve better efficiency and lower dependence on manpower.

Due to its locational and distribution advantage, Kolkata has also emerged as a warehousing and logistics hub in the east.

However, due to the proliferation of e-commerce in smaller cities, we have witnessed the growing demand for warehousing in tier 2 cities such as Jaipur, Ludhiana, Coimbatore, Lucknow and Guwahati.

With the government providing viability gap funding for PPP-based warehousing at block and district level, the warehousing sector is expected to receive a major boost.

This significant move is also likely to attract global investors and developers to the warehousing sector.

In the agricultural-based economy, the advantages of organised and mechanized warehousing will be manifold. Apart from supporting agriculture and the local economy, warehousing coming up across rural centres will also bring down distribution costs and lead to further job creation.

“With a network of warehouses across rural areas, we can also expect reduced wastage of agricultural produce, better processing level and enhanced export of processed foods,” said Thakur.

Going ahead, the increasing use of technology will also lead to more efficient operations and reduced costs in warehousing, he said. fiinews.com