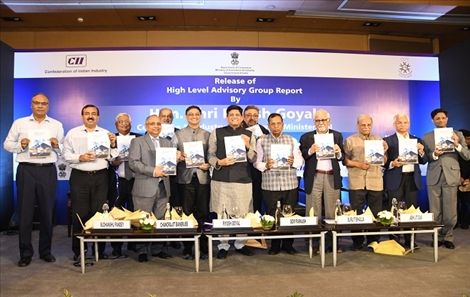 A report by the High-Level Advisory Group (HLAG) shows the way to achieve US$1 trillion export growth in the next 5 years, says Commerce and Industry Minister Piyush Goyal.

Releasing the report, the Minister stated that there was a need to look at the ways addressing the high cost of capital and the high taxation levels in the Indian Economy.

He noted that the Government had already acted upon the latter based on the Group’s interim report and the Finance Ministry had reduced the corporate tax rates.

The report release was organized by the Confederation of Indian Industry (CII) in cooperation with the Department of Commerce and the Centre for WTO Studies in New Delhi on 31 Oct 2019.

The Minister also highlighted the need to diversify India’s service exports so that we were not always dependent on IT/BPO exports.

He stated that there was also a need to promote manufacturing in the country and develop economies of scale.

Dr Surjit Bhalla, Executive Director–Designate for India to IMF and HLAG Chairman, stated that India had missed the path to accelerate exports growth in the past and the recommendations of the report were designed to ensure that we did not miss this opportunity again.

He mentioned that apart from the high cost of capital and the high taxation rates, there was a need to open up the agriculture sector and encouraged states to implement the Model Agricultural Produce and Livestock Marketing Act, 2017.

He pointed out that India’s strength lay in the Financial Sector and there was a tremendous opportunity to increase exports of financial services.

Sudhanshu Pandey, Additional Secretary, Department of Commerce, pointed out that for the past 7-8 years, India’s trade had been stagnating at the US$300 billion level and there was a need to give this a boost. The recommendations of the High-Level Advisory Group were designed to provide just such a boost, he added.

CII Director General Chandrajit Banerjee underlined the need to diversify services exports from the country and the 12 Champion Sectors that were shortlisted by the Government which could act as a starting point. fiinews.com