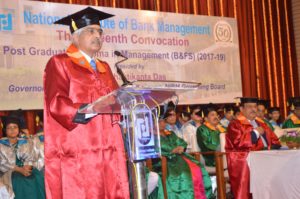 India received net foreign direct investment of US$18.3 billion in April-July 2019, higher than US$11.4 billion in the corresponding period of 2018-19, the Reserve Bank of India’s Governor Shaktikanta Das said.

Significant progress has been made in external debt management since the external payment difficulties encountered in 1990 which triggered wide-ranging structural adjustments and reforms, he said at the Bloomberg India Economic Forum 2019 in Mumbai on 19 Sept 2019.

Describing the Indian economy as a preferred habitat for foreign direct investment (FDI), he said India’s external sector has exhibited
The level of external debt at 19.7% of GDP and the debt service ratio (principal repayments and interest payments as a ratio of current earnings) at 6.4% of GDP are among the lowest in emerging market peers.

“This places India among the least externally indebted countries of the world, by the World Bank’s classification,” he pointed out.

In terms of a broader measure of external liabilities – the net international investment position (NIIP) which includes both debt and equity liabilities, net of foreign assets – India’s exposure declined to 15.9% of GDP at end-March 2019 from a peak level of 18.3% at end-March 2015.

The level of foreign exchange reserves was at US$429 billion on 13 September 2019, sufficient to cover close to 10 months of imports or 21 months of debt of residual maturity up to 1 year.

These healthy developments are underpinned by the innate strength of India’s underlying fundamentals, stressed Das giving his economic report.

The degree of openness of the economy, measured by the ratio of exports and imports of goods and services to GDP, has risen from 20% in the first half of the 1990s to 44% in the latest five-year period from 2014-19.

In line with the expanding share of services in domestic output, India’s services exports have grown rapidly over the past two decades.

In fact, India’s services exports have shown a higher degree of resilience to global shocks than merchandise exports.

India’s IT sector, which earned US$78 billion through net exports in 2018-19, is leapfrogging into new technologies including artificial intelligence, machine learning and robotics.

The Indian diaspora is among the largest in the world and reflecting this, India currently receives the highest amount inward remittances in the world from Indians working abroad.

Alongside, accretions to non-resident deposits have provided stable and reliable support to the balance of payments over the years.

Financial openness, measured by the ratio of gross capital inflows and outflows to GDP, has increased three-fold from 15% in the first half of the 1990s to 45% during 2014-19.

Notwithstanding these achievements, there are several areas of concern as well which occupy centre-stage in the conduct of external sector management, Das acknowledged too.

First, merchandise exports have lost momentum under the weight of the slump in world trade. In spite of export volume growth averaging 4.2% during 2013-18 (UNCTAD, 2019), India’s export growth in US dollar terms has weakened – as in a host of emerging and advanced economies – to 2.2% over the same period, as falling unit value realisations have taken their toll.

The slowdown in global demand has affected our exports of petroleum products as well – they constitute 14% of total merchandise exports.

Second, the deceleration in domestic demand has pulled imports, especially non-oil non-gold imports, into contraction and this has reduced the inflow of intermediates, capital goods and technology that is vital for modernising our infrastructure and industry.

Third, portfolio flows, which on average account for about 23% of external financing in a normal year, have turned highly volatile, with net outflows of US$0.6 billion in 2018-19.

During 2019-20 so far (up to 13 September), portfolio equity outflows were of the order of US$1.4 billion but lower than US$2.9 billion in the corresponding period a year ago.

Net inflows into the debt market of US$4.1 billion have, however, provided relief.

Moreover, these portfolio capital movements have turned out to be conduits of global spillovers, impacting domestic equity, debt and forex markets, and asset prices.

Nonetheless, the underlying resilience of India’s external sector, anchored by the positive features I set out earlier, have cushioned these shocks and insulated the domestic economy, he pointed out.

Against this backdrop, I would like to turn to several recent initiatives undertaken by the Reserve Bank of India and the Government to fortify India’s external position and improve the capacity of the economy to deal with the headwinds that confront us in these testing times.

Exports hold the key to a sustainable balance of payments position. In the final analysis, liabilities in the form of debt and even equities cannot entirely substitute for foreign exchange earnings from exports of goods and services that create import purchasing power and liability servicing capacity.

Over the years, the policy endeavour has been to secure a wide diversification in India’s export profile in terms of both products and destinations.

In particular, product diversification has enabled India to broaden its export basket relative to BRICS peers and reduce its vulnerability to trade shocks.

Apart from diversification, India is now exporting sunrise products like electronics, chemicals and drugs and pharmaceuticals for which demand is expanding at the global level.

In the smart phone segment of electronic goods, India has transformed itself from being a net importer to an exporter with the impetus from the phased manufacturing programme.

Looking ahead, several initiatives have been put in place and others are being launched on an ongoing basis to enable export industries to regain productivity and cutting-edge competitiveness, said the Central Banker.

They include upgradation of export facilities, integration of Indian farmers and their products with global value chains, and trade facilitation measures.

More recently, efforts are going into reimbursement of taxes and duties, including electronic refund of input tax credits in GST. An action plan for 12 ‘champion’ services sectors, including IT, tourism and hospitality, and medical services has been developed since February 2018.

The Reserve Bank and the Government are actively engaged in the promotion of e-commerce platforms that will boost the exports of both merchandise and services. All these steps seek to create a more conducive climate for exports, he assured.

With regard to capital flows, India has adopted an approach marked by progressive liberalisation but calibrated to the realities of the domestic situation, including the evolution of financial markets.

A diverse range of instruments for managing exchange rate risk for an expanding investor base has come into play, he informed.

Turning to equity flows, FDI policy has been progressively liberalised across various sectors in recent years to make India an attractive investment destination.

In August 2019, FDI norms in single-brand retail trade have been further liberalised. FDI up to 100% has been permitted under the automatic route in contract manufacturing and coal mining.

With regard to foreign portfolio investment (FPI), Das pointed out that several measures have been undertaken to create an investor-friendly regime and to put in place a more predictable policy environment.

FPI limits are now being revised on a half yearly basis under the medium-term framework. FPI has been allowed in municipal bonds within the limits set for State Development Loans (SDLs).

Greater operational flexibility has been granted to FPIs under a Voluntary Retention Route (VRR) which facilitates investment in G-secs, SDLs, treasury bills and corporate bonds while allowing investors to dynamically manage their currency and interest rate risks. The initial response to the VRR scheme has been encouraging. The Union

Budget 2019-20 proposed to ease KYC norms for FPIs and also merge the NRI portfolio route with the FPI route for seamless investment in stock markets. Outward direct and portfolio investment have also been progressively liberalised to give Indian entities a global scan and presence.

The list of eligible borrowers has been expanded to include all entities eligible to receive FDI, registered entities engaged in microfinance activities, registered societies/trusts/cooperatives and non-government organisations.

A rule-based dynamic limit for outstanding stock of ECBs at 6.5% of GDP is in place. Rupee denominated bonds or Masala bonds under the ECB route offer an opportunity to domestic firms to borrow from international markets without the need for hedging exchange rate risk.

ECBs up to US$750 million or equivalent per financial year are permitted under the automatic route.

The mandatory hedging requirement had earlier been reduced from 100% to 70% for ECBs with minimum average maturity period between 3 and 5 years in the infrastructure space. Net disbursement of ECBs rose to US$7.7 billion in April-July 2019, as against net repayments of US$0.8 billion in the corresponding period of 2018-19.

Das also gave an update on exchange rate. Over the last couple of years, the exchange rate has seen large two-way movements with considerable volatility imparted mainly by global spillovers.

During 2019-20 so far, the rupee has traded in a narrow range, with modest appreciation in Q1 giving way to some depreciation in August and the first half of September, accentuated by drone attacks on Saudi oil facilities on 14 September 2019.

In its External Sector Report of July 2019, the International Monetary Fund (IMF) has employed a suite of models to assess the alignment of currencies with their fundamentals.

For the rupee, the IMF estimates the REER gap to be zero, implying that the currency is fairly valued and broadly in line with fundamentals.

India’s exchange rate regime is flexible and market-driven, with the exchange rate being determined by the forces of demand and supply.

The RBI has no target or band for the level of the exchange rate, he said.

Interventions are intended to manage undue volatility. This is reflected in the two-sided interventions conducted during the past two years – net purchases in 2017-18, followed by net sales in 2018-19.

In fact, it is in recognition of this flexibility that the US Department of the Treasury has removed India from its watch list relating to currency manipulation, said the Governor.

Overall, the outlook for India’s external sector is one of cautious optimism, albeit with some downside risks accentuated at this juncture, said the Central Banker.

Among them, deepening of the global slowdown and escalation of trade and geopolitical tensions appear to be the most significant.

Volatile international crude prices also continue to pose potential risks to the viability of the current account balance through trade and remittances channels.

Yet, there are underlying strengths that can be built upon to buffer the external sector from these risks.

The search for new export markets and new niches must go on so as to reap the benefits of changing dynamics of global value chains, he said.

Das impressed on the need for Indian IT companies to accelerate market diversification and invest in new skills and technologies to hone their comparative advantage.
Remittances and non-resident deposits are likely to remain shock-absorbers over the medium term and need to be assiduously cultivated, including by ease of remitting/depositing and reducing transaction costs.

Ultimately, the strength of the external sector derives from domestic macro-fundamentals, he pointed out.

Investors and markets need to be credibly assured of our ability to maintain macroeconomic and financial stability through continued focus on these areas.

At the same time, we need to persevere with structural reforms in various sectors of the economy to unlock productivity and competitiveness gains.

The overarching objective should be to keep the current account deficit within sustainable limits and financed by a prudent mix of debt and equity flows.

As I stated earlier, the global environment is challenging, but it offers opportunities as well.

By the IMF’s assessment, India will account for a sixth of global growth in 2020.

Trade wars are presenting new business relocation avenues that seem to be favourable to India from the point of view of the economies of scale and scope.

Indian entrepreneurship, the rupee and our people are progressively but inexorably internationalising.

Since 2018, India’s working age population has grown larger than the dependent population, and this demographic advantage is expected to last till 2055.

In this milieu, prudent external sector management with a close and continuous vigil on areas of external vulnerability assumes critical importance and will continue to receive RBI’s close attention, he assured. fiinews.com

Mahindra-Ford to build SUVs and EV