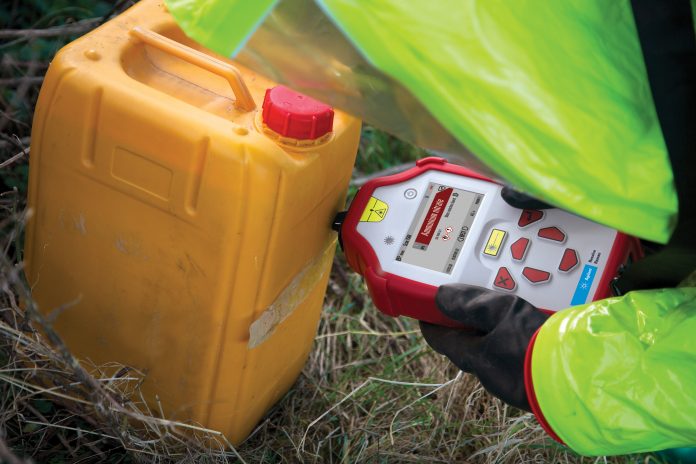 Re-emerging out of the Oxford science hub is an Indian-origin laser-based technology, modified by a UK company, to provide an effective detection system for security purposes.

C.V. Raman was a great Indian scientist who, in the 1920’s, developed an idea in the field of light scattering that earned him the 1930 Nobel Prize in Physics. His idea, to shine a laser at a material and measure the response, allows accurate chemical identification, analogous to collecting a fingerprint.

Oxford based Cobalt Light Systems, now a part of Agilent Technologies, used an innovation around this principle, to create novel Raman Spectroscopy Systems for Non-Invasive Through Barrier Chemical Analysis. The company’s Raman Spectroscopy portfolio includes instruments, technologies, and accessories for a wide range of applications.

With good measurements of the container and contents, and some additional processing (made possible with modern technology) it is possible to accurately ID the chemical inside the container.

Agilent’s systems also have the ability to scan through-barriers, significantly increasing the safety of civilian and military security personnel, first responders and custom officials, who no longer have to open containers to ID what is inside, with all the inherent risk of exposure and explosion that can come with that opening.

Agilent showcased the Indian origin invention at the DefExpo 2020 in Lucknow 5-8 Feb 2020.

Wood said, “the laser-based reading technology in the form of a hand-held device is being demonstrated to Indian security forces and Customs departments – ‘through barrier’ without having to open containers, bottles and packages.”

More and more countries are using the device across security sensitive areas for inspections at airports, ports and borders.

It reads and gives details of contents in containers, bottles, packages, making it the easiest form of thorough checking in a maximum time of 90 seconds per measurement, and for airport security liquid explosive detection less than 5 seconds.

“We are now working with an Indian company Measurement Solutions as they have knowledge of the security market in India,” said Wood who looks after field testing equipment in Raman Lab at Oxford.

“Together with their market knowledge and our technology knowledge, we are demonstrating how the device is useful and can help prevent terrorism-weapon and narcotics smuggling,” said Wood.

The device is being demonstrated to Ministry of Home Affairs and Department of Defense in India.

“We are also working with a number of other Indian agencies on the effective use of Raman Technology device,” he said. fiinews.com

Altizon scales up factories in India and North America

Altizon scales up factories in India and North America

ABOUT US
NEWS ON FOREIGN INVESTMENTS, ECONOMIC & INFRASTRUCTURE DEVELOPMENT IN INDIA
Contact us: [email protected]