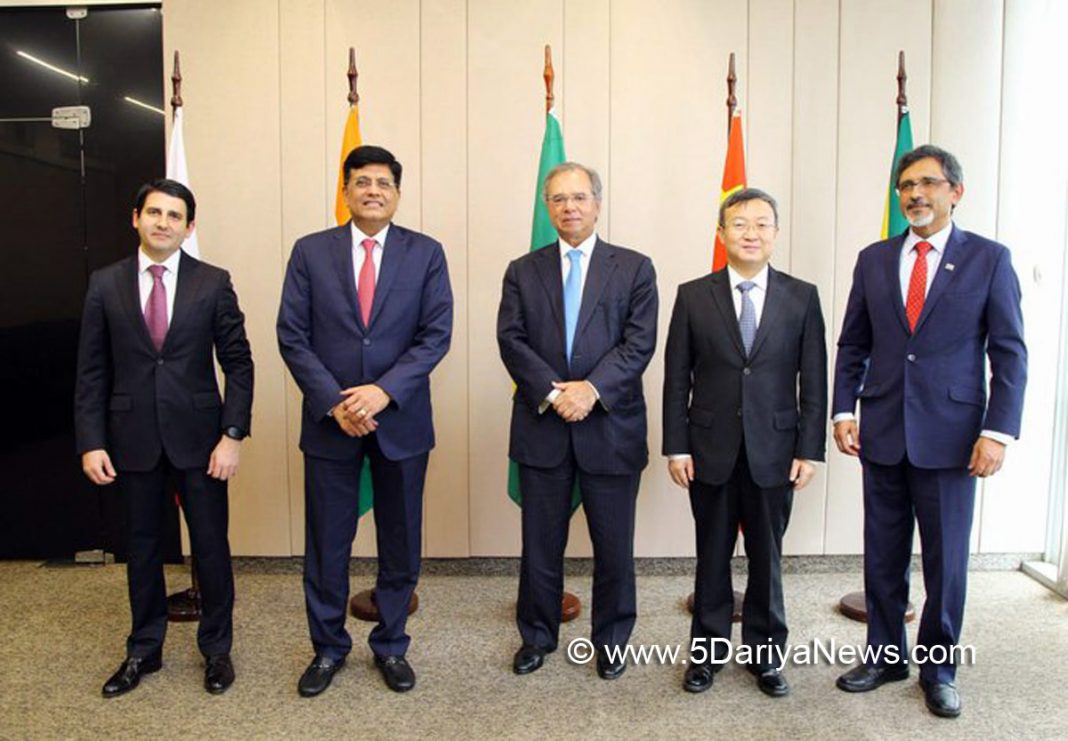 This was underlined by Commerce and Industry Minister Piyush Goyal on 12 Nov 2019 at the meeting, where he expressed his confidence that the MoU will further promote trade and market studies and will narrow gaps in trade facilitation measures in BRICS countries.

Cooperation through these frameworks will encourage value added outcomes for stakeholders, he stressed.

The Minister noted that the joint communique reflects the resolve towards an open, fair, transparent and inclusive multilateral trading system.

He further said that as the Joint Communique feeds into the BRICS Leaders’ Declaration it sends a strong message to the world in defence of free and fair trade and revival of the rules-based multilateral trading system.

He reiterated that India’s no strings attached model of cooperation is driven by the requirements and priorities of India’s partner countries.

Goyal urged the BRICS countries to again focus on trade as a catalyst for development, poverty alleviation and job creation.

BRICS countries, added the Minister, have natural resources, human capital and financial outreach and have the potential to become global growth engines and leaders in innovation and enterprise.

Addressing the session on ‘Advancing BRICS Trade and Investment Cooperation- the Road Ahead’, he urged the BRICS countries to develop digital infrastructure, skills and institutions with special focus on the developing countries and Least Developed Countries (LDCs).

The Minister highlighted the adverse impact of predatory pricing that is practised by some e-commerce players that adversely affects millions of small retailers.

He urged the BRICS countries to collectively take the lead in shaping the narrative on reforms within the WTO in order to enhance its relevance and effectiveness in the contemporary technological and trade environment.

He also pointed out that increasing trends of protectionism in the form of Non-Tariff Barriers (NTBs) are denying market access to India’s Micro, Small and Medium Enterprises (MSMEs) particularly from the developing countries.

Developed countries advocate open and free trade with emphasis on removal of tariffs in developing countries but they themselves are raising more barriers in the form of NTBs that are leading to economic uncertainties and raising the cost of doing trade in developing and Least Developed Countries (LDCs), said the Minister.

India’s 50 million MSMEs create over 100 million jobs and contribute 40% to India’s exports. “It is the backbone of Indian economy,” added Goyal. fiinews.com