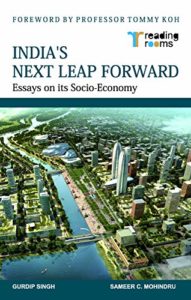 The fundamentals of Indian economy remain quite robust with inflation under check and bond yields low, said the Finance Ministry in reaction to changed made by Moody’s Investors Service on Indian economic outlook.

“India continues to offer strong prospects of growth in near and medium term,” said the Ministry, noting the change in outlook on ratings to negative from stable.

The Ministry pointed out that India continues to be among the fastest growing major economies in the world, adding that the country’s relative standing remains unaffected.

The International Monetary Fund (IMF) in its latest World Economic Outlook has stated that Indian Economy is set to grow at 6.1% in 2019, picking up to 7% in 2020.

As India’s potential growth rate remains unchanged, assessment by IMF and other multilateral organizations continue to underline a positive outlook on India.

The Government has undertaken series of financial sector and other reforms to strengthen the economy as a whole.

The Government has also proactively taken policy decisions in response to the global slowdown. These measures would lead to a positive outlook on India and would attract capital flows and stimulate investments, said the Ministry on 8 Nov 2019.

If fiscal consolidation is demonstrated through prudent spending and higher revenues through privatisation receipts, along with a wider tax base, the worries over Indian economic growth outlook will be allayed, said Singapore’s DBS Bank.

Encouragingly, cyclical growth momentum is getting a hand from reduction in rates and surplus liquidity conditions, wrote Radhika Rao, Vice Senior Vice President and Economist at DBS in Singapore.

Looking past the transient spike in inflation, there is room for monetary authorities to provide more support this year, added Rao in comments on Moody’s Investors Service downgrade of India’s economic outlook to negative from stable.

Jewar Airport: A Revival for Noida and Greater Noida!

Everise-Microsoft to roll out AI platform