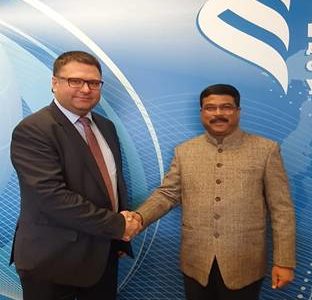 He met Sergey Tyrtsev, the first Deputy minister for development of the Russian Far East and Artic, on 23 Oct 2019 as part of his four-day visit to the region.

Pradhan also discussed cooperation in coking coal, oil, gas and rare earth metals, specially Lithium with executives from RosGeo, the national geological company, which does Seismic and Geological Study of oil, Gas and other issues. Rosgeo was a part of the efforts to discover the ‘Bombay high’ field of ONGC.

Pradhan interacted with Senior Management of Vostochny inter modal container port. It is one of the oldest and year-round operation port in the Russian Far East, specialized in coal handling and suitable for handling large tonnage ships. The Minister discussed with port authorities about their expansion plans and also on ways to secure more coking coal for the domestic steel industry. Fiinews.com