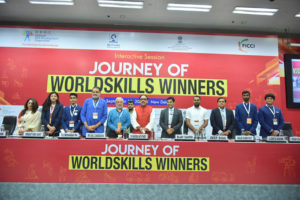 The government is working to make India the hub of largest skilled workers in the world, said Dr Mahendra Nath Pandey, Minister of Skill Development and Entrepreneurship.

There is no dearth of talent in the country, they just need to be identified and provided with a platform, he said at the ‘Journey: WorldSkills Winners’, organised by FICCI to felicitate the Indian winners of World Skills Kazan 2019 competition on the eve of FICCI’s 12th Global Skills Summit on 19 Sept 2019.

“It has been Prime Minister Narendra Modi’s dream to make India largest provider of skilled workforce not only for the needs of the country but for the entire world. We are all working to achieve this dream,” Dr Pandey said, adding that India would be the most populous country with 1.4 billion people by 2025.

Congratulating the winners of four medals and 15 medallions of excellence at the recent World Skills 2019 at Kazan in Russia, Dr Pandey said that India has moved up from 33rd rank in 2015 and 19th in 2017 to 13th in 2019 among 63 countries.

“It’s an honour and matter of great pride that India has been ranked 13th out of 63 countries who participated at WorldSkills International Skill Competition and we have 19 medal and medallion winners this year,” he said.

Dr Pandey said that the government is planning two additional Indian Institute of Skills (IISs) at Kanpur and Ahmedabad on the lines of one coming up at Mumbai. These institutions would be of international standards at par with those in Singapore, Germany and England.

“There is no dearth of skilled workforce in the country. It’s just that we need to extend to them the right platform and opportunities to further enhance and showcase their skills,” he added.

Prof. Anil D. Sahasrabudhe, Chairman, AICTE, said that passion and confidence are required to become best in any talent. He extended all support from AICTE including funding and setting-up specific Centres of Excellence across country.

In order to excel in life, one must first have a dream and then follow it with hard work, perseverance and finding a mentor, said T.V. Mohandas Pai, Honorary Advisor, FICCI Skills Development Committee and Chairman, Manipal Global Education.

He further added that by 2025, India should not only become a US$5 trillion economy but should also win 25 gold medals at the World Skills competition.

FICCI Knowledge paper on ‘Implementation of Apprenticeship in India’ was also released during the event. fiinews.com

Call for Asean-India to work on Agri and Blue Economy

Eros-Veriown to reach over 300 million people deprived for electricity